by Swimming in Bengal 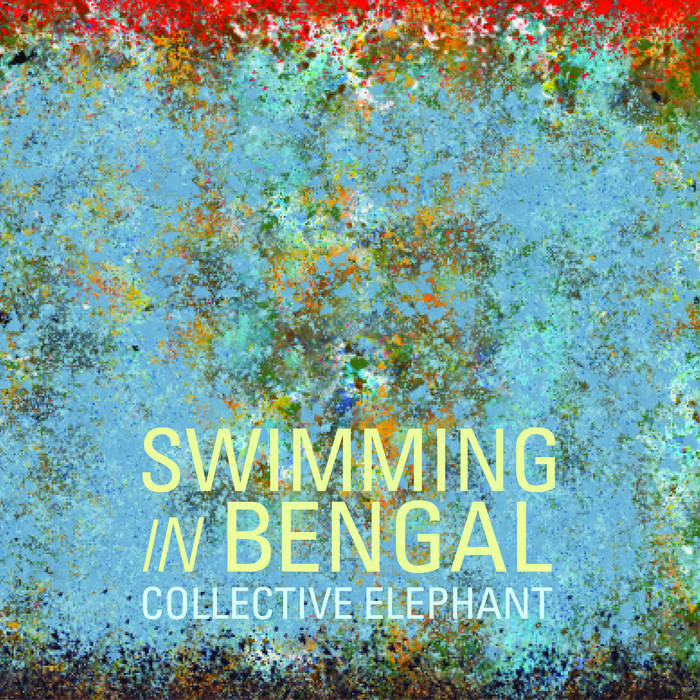 "Bandleader Tony Passarell has switched things up a bit for Collective Elephant, the latest addition to the increasingly serpentine Swimming in Bengal canon. Having long planned to record with what he terms “a stacked line-up,” he has here positioned himself as something of a conductor, directing his saxophone at the additional players when he wants them to join in or drop out around the core membership of gourd guitarist Jed Brewer and percussionist Rusi Gustafson. So cellists, vocalists, acoustic bassists, flautists and Native American instrumentalists are all present at Passarell’s behest, lending the already entrancing improvisers humid richness and haunting depth.

It’s a long and winding journey, and one which can be hard to absorb in one go – I found myself stopping several times to take on sustenance when the nigh on twenty-minute “Smoldering Embers of Middle Age” hit midway through – but one that thanks time taken to allow its smokelike effects to take hold. Opener “Jungle Ragu” is all Conradian drift and chittering menace, closing in and growing warmer as the ensemble melds, a darkly enigmatic undercurrent bubbling near the surface without ever quite breaking.

Much of what makes Swimming in Bengal such a gripping outfit can be found in their more caliginous tendencies; the players’ uncanny ability to pluck plot lines from the pot is not just testament to their immense skill as improvisers but their knife-edge imaginations too. “Night Market,” for example, is suitably rich with the scent of spice and cooling adobe, but it plays out mainly on the plaza’s edges; Passarell’s horn slinks catlike as the bass chases shadows and Brewer’s guitar puffs opiate plumes from darkened doors. The cat-and-mouse culminates with a plunge into the scene’s bustling interior, the percussion growing in pace and intensity as stall frames fall and sumac meets sand.

Amy Reed’s voice, perhaps the most noticeable new addition to the Bengal sound, is not introduced until “Icons of Myth,” a slow, churning dark surf track over which she haunts the waves like a siren, lulling the listener inwards to face the heart of darkness. From here Reed appears with regularity, playing a similar role across the sawing “Ship is Home,” and, for the album’s lengthy centrepiece “Smoldering Embers of Middle Age,” infiltrating the atmosphere like the merest will o’ the wisp.

“Smoldering Embers…” moves through several movements and makes use of the deeper tones afforded by the cello and bass to evoke the sombre plod of mortality as flutes, bells and whistles taunt and make nimble mischief underfoot. It is atypical of the collective in that the Middle Eastern influence is permitted to die back for a significant central portion as Passarell hands over to the newcomers to make their presence felt. Without wishing to cause offence, it is tempting to translate the track as a form of auditory desquamation considering all three central members fall in or around the title’s age bracket. Cooler and airier than the group’s previous output, the piece, for all its length, actually elevates and refreshes, allowing for the expulsion of any dust that may have gathered in the lungs on the journey thus far – the feeling is that Passarell and co. are grateful for the additional input and the greater freedom it affords them as men of a certain age who’ve worked together so long over so many sessions they know each others’ moves before they even happen.

Tenuous as it may sound, the theory does bear out. If the first half of the album saw the core three take the lead, “Liquid Feedback” sees Passarell challenge them to build around the guests. It begins with a waver of flutes and hulusi so light the players’ breathing is audible on the air between. A noticeable swathe of time passes before any Swimming in Bengal member joins in – here it is Reed who takes up an Imam-type role to call in Passarell’s horn and so entice Brewer and Gustafson. It is like a sparkling dawn chorus; opaline, cool and kind of sphinxy.

Closer “Rehydrate” wastes no time in bringing everyone together for a final jam. Building rapidly this time around hand drums and the lilting scratch of Keith Cary’s cello, it could pass at points as a Muslimgauze track. Strings and bass commune in a drone that acts as a blooming lily to Brewer’s guitar, pecking and zipping around its edges like a hummingbird before the pace is raised and all comers are welcomed to the party. The structure is loose, the narrative blurry, and the atmosphere jubilant, ending the record with a crash of activity at odds with what went prior. Sated by a successful experiment, Passarell drives his charges on to horizons over which the sun always rises and the streams run cold and clear." -Underscore Magazine UK

Collective Elephant was recorded/mixed by Greg Hain at Gold Lion Arts Feb 2019 in Sacramento, CA. The music is improvised without any overdubs.

Cover art by Tony.
Special thanks to Ross Hammond and Greg Hain
latherrecords.com/swimming-in-bengal/